My friend had a beautiful bouncing boy this past February. I wanted to make her a quilt for her baby shower which was held in December. (If you read my other quilt post, you will see I do have good intentions regardless the outcome of the quilt).

Her room theme was nautical, but it is very hard to find a “cute” nautical fabric pattern. I went online and explored and came up with some fabrics I liked, pieced them together and came out with the first row seen in the screen shot below. Perfect! I tried to figure out the quilt size I wanted and ordered the fabrics. Wouldn’t you know when I got the fabrics and cut all the squares and started to lay them out, I realized how stupid I was! Of course it would not look very much like a patchwork quilt because it would all line up with the same piece in every row. So, I went back on the computer and played around to come up with the second row seen below in the screen shot. Very good, now it will be mixed up and look better.

Ok, everything was cut and it was time to put together. Do you think I laid everything out? Nope. Just the two rows and then sewed an even amount of rows in the two patterns. Then laid it out to find out it looks like a quilt split down the middle. Ugh! Oh well, I was running out of time. In my defense, it had been a long time since I made a quilt. So I sewed the front together and got the back together and was time to sew the whole thing including the batting. I layered it up, sewed the whole quilt and OMG! When I pulled it out the batting was on the outside. I had to sit down and undo every single machine stitch and then re-sew the whole thing. I finally finished! If you look closely though, you will see that even though I had a nice template, the squares are not all the same size and don’t match up evenly. At least they match up unevenly! Two lessons learned here: 1. Don’t attempt to take on a quilting project if you don’t have the time and focus for it. 2. I taught my kids how to use a sewing machine, they made the pillows in the picture to match the quilt seen below.

I told my friend that the intention anyway was to use this on the floor for playtime and it looks like that’s what they are doing! 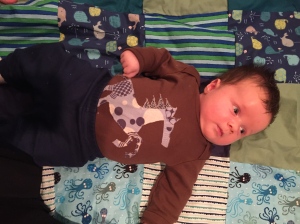 Very pretty colors! I’m glad you could salvage it from the errors. How frustrating, (and it has happened to every one of us), to be slowed down by things going awry. All in all, this is a lovely quilt, and I’m certain, much appreciated!

It was and after all, the intention was to “use” the quilt. I know I will never make a blue ribbon winner! : )

These things happen. Our king sized quilt, an early one that I made, accidentally had all but one of the blocking the same way (they were to look random back and forth). I noticed it in a photo after it had been quilted, too late! Another one, I had two central blocks, all pieced outward, one went the wrong way compared to the other. Fortunately that one was caught early enough so I could take it apart and fix it as it would have ruined the design. This one looks like an already much loved baby quilt, so that is great!